Status, Style, and Culture: Interpretation of the 1870s Parlor and the 1931 Living Room

By Curatorial Intern history, Long Beach Dec 20, 2018 2 Comments on Status, Style, and Culture: Interpretation of the 1870s Parlor and the 1931 Living Room 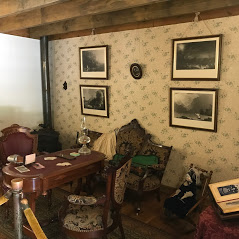 During the Victorian era, the parlor was the front room of every middle and high-class homes and for some, used exclusively to receive and entertain guest and for others, used as an environment for family intimacy. The parlor was the reflection of who the family was and therefore a lot of money and thought went into consideration for the furnishings and designs. The word parlor originates from the French word parlëure or parler which means “to speak” or “conversation.”

In the 18th and 19th century, having a parlor room was proof of having a high ranking status. Although the United States during the 19th was in the process of establishing an American identity that did not reflect the European culture, they held on to the parlor that did belong to European culture to maintain the portrayal of civilization. It was the reflection of the United States willpower to achieve the “American Dream.”

In the early 19th century the status of wealth was demonstrated by land ownership and trade. The parlor offered a new method of status; the family either purchased expensive furniture or furniture that looked expensive. It was the room where the family displayed their best furnishings, work of art and other forms of status ciphers. The rise of industrialization had allowed for certain styles and designs of the parlor to become popular since mass-produce machine made furniture and household furnishings made it available. The parlor was a room for the family to validate gentility and proper behavior was heavily enforced among family members and guest. 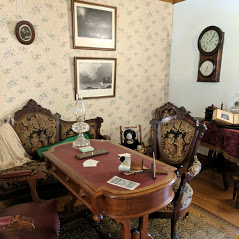 To keep up with the popular styles, magazines such as Godey’s Lady Book and Harper’s Bazaar published the latest trends and what was desirable and what was not. It was up to the lady of the house to meet those expectations. “To the lady of the house, the parlor was, or supposed to be the expression of her refinement and the stage on which she displayed her breading, her bibelots, her poise and her culture.”[1]

Romanticism was the main inspiration of design that derived from art and literature and it was popular for the furniture to reflect the trends of that era. The style of revivals echoed in the atmosphere of the homes in America and England in the late Victorian period.  With the exemption of the Gothic Revival and the Eastlake style, French style was more desirable and dominated the furniture design in the United States.[2]  The Rococo Revival, “French antique” was common in the parlor room because of its grace and liveliness was distinguishable amongst other revivals, though there was a mixture of revivals within the rooms and furniture.

The parlor in Rancho Los Cerritos display a mixture of revivals within the furniture; the parlor table and maroon shield back armchair is original to the site (1865-1880) and it is of Renaissance Revival. The sofa, lady’s cha 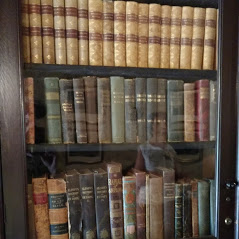 ir and armchair (1870-1880) have the elements of Rococo or Louis XV style. The lady’s chair is a mixture of the Rococo, Gothic, and Neo-Greek revival.[3]

By the mid-19th century, a seven-piece match set was essential in the parlor; an arm chair, lady’s chair, a sofa and four parlor chairs. The design system of the chairs symbolized a social hierarchy within the Victorian family. The perception of the arm chair that belonged to the husband/father was “throne-like” because of its highly decorative design. The wife’s/mother’s chair was “less” impressive compared to her husband’s which established the woman’s subordinate position in 19th century society. Her chair lacked arms or had small ones to accommodate her dress. The sofas, mainly used for the guest to sit alongside with their host signified hospitality and friendship.[4] In the middle of the nineteenth century, the center table became the essential furniture for the parlor. Andrew Jackson Downing wrote in The Architecture of Country Houses (1850), “The center of the table is the emblem of the family circle…”[5] Representing a cycle of friendship and intimacy within the family.

A new addition to the mid-19th century parlor was the étagère (whatnot) and it dominated the Victorian parlor. It consisted of having 4-5 shelves which allowed for the family to display mementos of family trips, decorative objects, photos of distant family members and current reading materials. The wife had the freedom to display objects of her own to express her individuality.

During the outbreak of the Influenza, it was common to have the bodies of the deceased displayed for the viewing in the parlor that it received the nickname “Death-Room.” After World War I, the number of deaths due to the Influenza had decrease, the magazine Ladies Home Journal published an issue in 1910 suggesting that the parlor should no longer be called a death room and instead be called “living-room” since it was a room in the home that held activities, socialization and happiness it had become more of a lively room than a mourning place.[6]

Lillian Hart Tyron, author of Speaking of Home: Being Essays of a Contended Woman (1915) recalls the tension atmosphere of the parlor and the pleasure transition to the living room. Tryon wrote,

We are fast becoming a parlorless nation…The parlor now is relegated to the cold and viewless side [of the house], or is crowded into a corner of the hall, with two chairs and a palm. We could not get our parlors back if we tried, because we ourselves have change. The living room answers to a new social feeling.  Life is too full to have patience with formalities. The cry of the time is for few friends and good ones. The living-room is an intimate apartment, where people are at ease with one another…[7]

By the end of the nineteenth century, people began to move more into the cities rather than houses. Only expensive apartments had a private room for formal use. Gradual change overcame women as well; women suffrage, access to education, job opportunities opened due to WWI. Some women did not have the time to be occupied in the parlor’s appearance.

This post was written by Andreyina Juarez, the 2018 Getty Marrow Undergraduate Curatorial Intern.