If you have any questions about the garden that you would like answered you can send our horticulturist Marie an email at Marieb@rancholoscerritos.org or send us a message on social media @RanchoLosCerritos.

Designed as a buffer zone along the property line as part of the 1931 estate, Cornell integrated native plants with popular exotics. Much of this buffer zone has been changed to accommodate newer construction including a 1950s parking lot and our 2012 Visitor Center. The garden was reimagined in 2014, many of the historic trees remain and create a shady environment enhanced with many California native plants. Leaving the Visitor Center, you will notice brightly colored panels as you enter the California Native Garden. These panels explain how the dry stream bed serves the Rancho and neighboring properties by capturing run-off during rainy weather. Next to the panels, you can see mahonia. Mahonia leaves shift from shades of dark green to a red color. Small yellow spring flowers add contrast to the foliage. Indigenous people used these plants for food and dye. Please note: The indigenous people were experts when it came to the uses of plants. Please do not pick or eat any of the plants on-site. In between the two panels, you will see a Catalina Ironwood. The ironwood gets its name from the density of its tree’s wood. The indigenous people would use the wood to make tools that range from shafts for paddles and shovels to building materials. While the wood is incredibly dense, it also floats. You’ll notice the sycamores (trees with pale bark) around you. There are also some oak trees at the end of the winding path. Oak trees are considered the beginning of civilization. They enjoy the same environment that people do and the acorn-fed people around the world, including the Tongva from this region. When you are ready to exit the California Native Garden you can take the stairs or use the path from where you entered. Next, we suggest you go down the orchard path to the right of the adobe house.

There have been fruit trees on the site since the 1840s, including lemon, orange, and pomegranate. During the 1930s remodel, tropical and subtropical fruit trees were planted along the south side of the historic adobe house for shade. The orchard includes citrus, loquats, sapotes, cherimoyas, macadamias, avocados, and guavas and was able to provide the Bixbys with fruit almost ten months of the year. Please note: these historic fruit trees are under quarantine. Do not pick or eat the fruit. Once our museum shop reopens, you can purchase jams and marmalades.

Entering the backyard from the orchard you will notice a large tree very close to the adobe home on your left. This is a Black Locust. The black locust trees, which boast fragrant spring flowers, were popular in New England during Temple’s childhood. Temple planted black locusts along the perimeter of his 1840s garden. The specimen located next to the library is interesting because the family chose to shave the corner of the adobe house during the 1930s renovation to accommodate the tree’s roots, rather than cutting down the tree. Walk past the Birds of Paradise and take the dirt path on your right lined with pomegranate trees. Three pomegranates remain from Temple’s 1840s garden, and they still produce a small crop of fruit that ripens during the fall. As the trees aged, they reclined and formed new roots where the trunk touched the earth. This extended their lives while adding a sculptural element to the garden. Continuing down the path past the cactus is the water tower. Water has always been scarce in Southern California. When Jotham Bixby and his family moved into the adobe in 1866, they dug a well, installed a windmill, and built a water tower. They used large, heavy canvas hoses to irrigate the plants. Past the water tower is a herb garden. Planted by volunteers in the 1980s, the herb garden is used to support our award-winning school tour program. It is divided into four sections – culinary, medicinal, dye, and potpourri – surrounding a central sundial. Back on the path, you will also notice a try pot on your right. The try pot was used during John Temple’s time to render (boil down) the fat of cattle. At the time, cattle were valued for their hide and tallow (fat), rather than their meat. Continue on the perimeter pathway until you reach the green gate and central brick path. You will notice two trees on the right of the brick pathway. The first is one of three remaining Italian Cypresses from the five Temple planted. The central cypress benefited from being near a water cistern. It grew so rapidly that it became a recognizable landmark – visible to travelers on their way to Los Angeles – by the 1870s. The tree farther down the brick path is the Moreton Bay Fig Tree. The Bixby family planted this tree circa 1880. A photo from the 1890s shows two well-established trees; by the 1930s, they had grown into one tree. Cornell gave the tree a steady supply of water when he installed sprinklers for the lawn that surrounded it. Please Note: The fig tree’s buttressing root system is not a safe area to climb, play, or take photos. We ask you to please stay off the roots. Return to the perimeter path you have been following to get to the camellia garden. At the center of the camellia garden is a Ginkgo tree. Llewellyn Bixby planted this tree after the 1930s remodel, amidst the formal rose garden (which has become a camellia garden due to shade conditions). While comparatively new in this garden, the Ginkgo dates back to the Carboniferous Period (about 300 million years ago) and is often referred to as a “living fossil.” Continue following the perimeter dirt path back towards the adobe house to the cutting garden. This garden was used by Avis Bixby to provide fresh flowers as home décor and gifts for friends. During the cooler seasons the sweet violets fragrant dark purple flowers carpet the ground, this flower was a favorite of Avis Bixby’s. At the end of the cutting garden is the wisteria arbor. In the 1800s, the Rancho had two arbors, each of which were planted with grapes. The grapes were gone before the 1930 renovation, so Cornell planted wisteria rather than grapes on this arbor. Today fragrant clusters of purple blossoms in March-April are reminiscent of the clusters of purple fruit. 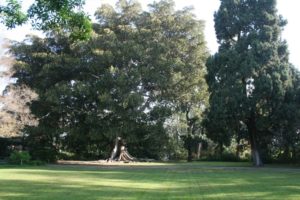 The Moreton Bay Fig (at left) and Italian Cypress (at right)

Many trees on site predate the 1930s. At nearly 175 years old, the Rancho’s historic Italian Cypress tree stands majestically in the backyard. John Temple, the settler who built Rancho Los Cerritos’ house in 1844, planted the tree for its great height and fast growth. Rancho Los Cerritos once stretched from present-day Paramount to the Pacific Ocean, encompassing more than 27,000 acres, and the Italian Cypress served as a landmark for visitors to find their way to the ranch house. Today, it is considered a notable tree of Southern California.

With its beautiful root system and dramatic canopy, the Moreton Bay Fig was planted in the late 19th century, and is in fact two trees that have grown into one. It’s an ideal spot for photo opportunities and makes a spectacular backdrop for wedding receptions.

In the 1930s, Rancho Los Cerritos was remodeled to become a single family home, and today’s gardens reflect those changes. The historic house sits on 4.74 acres of manicured gardens, designed by noted landscape architect Ralph D. Cornell. Today, the gardens remain sensitive to Cornell’s landscape design, circa 1930s, and many of the existing garden features have been maintained. 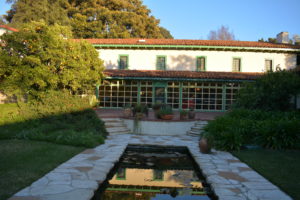 RLC’s inner courtyard was once a work yard for shoeing horses and fixing wagons. Today, the formal inner courtyard features a pond and fountain, true to Cornell’s vision.