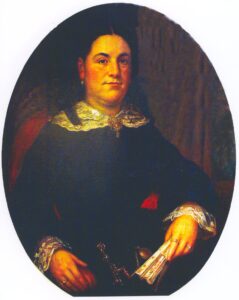 In honor of International Women’s Day, we are highlighting the life story of Rafaela Cota de Temple. She was the wife of John Temple, who established a cattle ranch at Rancho Los Cerritos in 1844 and commissioned the construction of the Rancho’s adobe home.

Rafaela Cota was born in March 1812 at the Santa Barbara Presidio to Maria Josefa de Jesus Cota and her husband Francisco Atanascio Cota. Rafaela’s father was a soldado de cuera, a Spanish leather-jacket soldier. Rafaela was born to a prominent and powerful criollo family, California-born descendants of Spanish ancestry, and the product of several generations of Spanish settlement in New Spain. 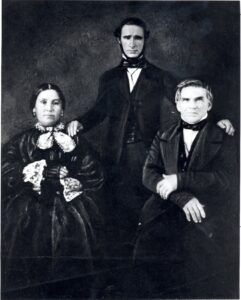 Rafaela married John Temple at the mission church in Santa Barbara on September 17, 1830. Marriage between Americano merchants like John Temple and Californiana women like Rafaela Cota was a common practice in Alta California. According to Antonia I. Castañeda, these unions “established family and kinship ties with the largest Californiano landowners [and] solidified class alliances between Anglo merchants and the Californiano elite, who were jointly establishing control of California’s economy” in the nineteenth century.1

At the time of their marriage, thirty-four-year-old John and eighteen-year-old Rafaela moved to Pueblo de Los Angeles, where Temple owned a mercantile store and was expanding his fortunes. They had a daughter named Francisca in 1831. John Temple acquired Rancho Los Cerritos in December 1843, which was one of five ranchos formally carved in 1834 from a massive concession made by the Spanish crown to leather-jacket soldier Manuel Nieto. Rancho Los Cerritos was inherited by Nieto’s daughter, Manuela, who married Guillermo Cota, cousin of Rafaela’s father. Guillermo Cota served as mayor and judge in Los Angeles and sold Rancho Los Cerritos to John Temple. 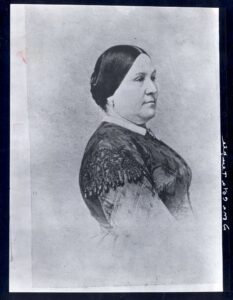 Unlike her husband, who supported the passing of Mexican California into American hands, Rafaela Cota de Temple was opposed to American conquest in 1848. As her husband expanded his business interests and political influence, Rafaela focused her attention on family and social connections, serving as madrina (godmother) to many friends’ and relatives’ children. In 1858 John and Rafaela Temple traveled to France to visit their daughter, who had moved there with her husband and children. After selling Rancho Los Cerritos to Flint, Bixby, and Co., the Temples left their life in Los Angeles to settle in San Francisco. They moved into a home on Bush street where Rafaela’s sister’s family already lived. On May 31, 1866, John Temple died, and Rafaela moved to France. She spent the rest of her life there and passed away in 1887.