In Honor of Lunar New Year, a Glimpse Into the Lives of Ah Ying and Ah Fan

By Rancho Staff history Jan 28, 2017 Comments Off on In Honor of Lunar New Year, a Glimpse Into the Lives of Ah Ying and Ah Fan 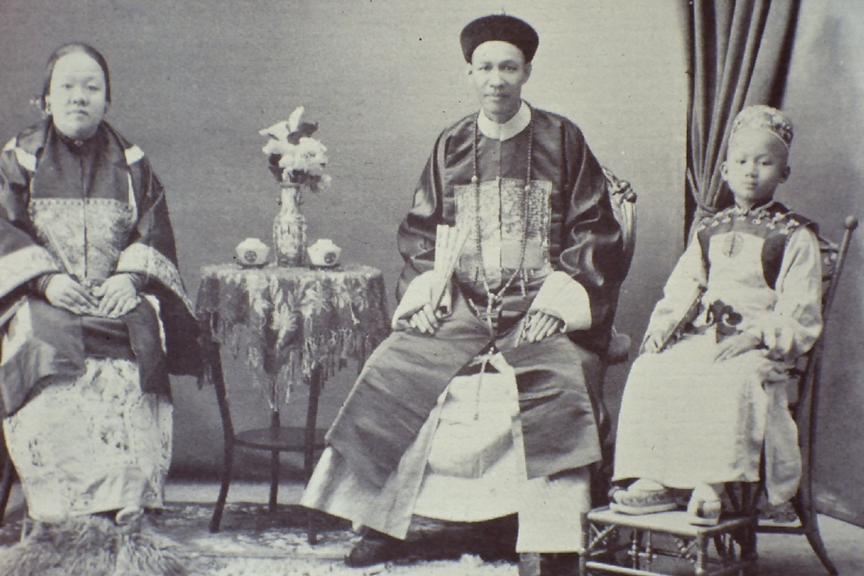 The majority of Chinese men coming to California in the 19th century were from provinces experiencing economic turmoil, political unrest, and natural disasters. They were drawn first by the dream of striking it rich in the California goldfields and then by promises of sure employment building the transcontinental railroad. These immigrants dreamed of making their fortune and returning home to China as wealthy men. Sadly, most of them worked hard for the rest of their lives here, sending money to support their families back in China, and were only able to return home upon their deaths.

While Chinese people did interact some with their non-Chinese neighbors in the United States, the truth is most neighbors were, at best, prejudiced, and at worst, violent. For this reason, cities across the United States established Chinatowns, where residents could live, shop, eat, and practice their religion within a relatively safe space. Most Chinatowns included a Taoist temple, for worship and community events, and shops. During the 19th century, 286 cities and towns in California had large enough Chinese populations that the city names were translated into Chinese characters — which Wells Fargo employees had to learn in order to distribute mail. San Francisco became Dai Fou, or “big city,” since it had the largest Chinese population, while Sacramento, which was along the path to the gold mines, was known as Yi Fou, or “second city.” The first Chinese New Year celebration was held in Los Angeles in 1857, and in 1923, Chinatown merchants invited Los Angeles citizens outside the Chinese community to attend the New Year festivities. In the 1940s, the tourist trade brought prosperity to Los Angeles’ Chinatown that has continued to the present day.

A stereograph photo of Ah Ying.

At the Rancho, two Chinese domestic workers were employed by the Bixby family. We know few personal details of the lives of Ah Ying and Ah Fan, but they likely shared much in common with other Chinese laborers in the Los Angeles area at the time. The primary sources available to us that describe Ying and Fan are a set of 1872 photographs from the Rancho, the 1880 census, Sarah Bixby’s book Adobe Days, and correspondence between Anne Bixby Chamberlain and Rancho curator William Evans from the 1950s. The 1872 photos show a man in traditional Chinese dress—a loose tunic and trousers known as shan ku, black skullcap, and white apron. From the apparent age of the man in the photograph, we can deduce that this is Ying. The 1880 census lists two single cooks, both born in China, working at the Rancho: Ah Fann, 21, and Ah Ying, 38. They no longer appear in the 1900 census. In Adobe Days, Sarah Bixby mentions Ying more than any other Rancho worker, so it is clear that he was an important figure to her, noting Ying took an interest in the children of the household. In a letter to William Evans, Anne Bixby Chamberlain recalls that Ying and Fan had a special cookie jar that was always full of treats for the children. We know from various accounts that Ying was in charge of feeding all of the people at the Rancho—the family, ranch hands, domestic servants, and sheepherders spread across the 27,000 acres—and Fan was his assistant. In Adobe Days, Sarah Bixby says, “Ying reigned supreme and Fan was his prime minister.”

From other contemporary sources, we can surmise a bit more about what Ying and Fan’s lives must have been like. In an account of his father’s childhood growing up at Rancho Santa Margarita, Jerome Baumgartner writes about domestic servant Sing Yung, who served there for forty years in a similar capacity to Ying and Fan at Rancho Los Cerritos. Sing Yung made $60 a month, more than most ranch workers, and saved the vast majority of his wages to send to his family in China. He only spent $5-$10 a year on clothing, and put a bit of money aside to finance a trip to China every four years. Other than these periodic trips to visit his homeland, Sung Ying took no vacations and worked every day from before sunrise until well after sunset. His day started at 4:30 in the morning, roasting and grinding coffee beans. He then spent the rest of the day cooking and serving meals for the various groups of residents on the ranch. During his “time off” from 1:00-4:00 in the afternoon, Sing Yung minded the children, often taking them fishing. The rest of the afternoon and evening was spent cooking, serving, and cleaning after supper.

It is very likely that Ying and Fan’s lives at Rancho Los Cerritos were quite similar to Sing Yung’s at Rancho Santa Margarita. Because Ying worked for an extended period for a prosperous white family at Rancho Los Cerritos, he would have been a respected figure in the Chinese community and a source of advice for his fellow Chinese who had less experience in the white man’s world. Like other Chinese immigrants in America at the time, Ying and Fan most likely maintained a sense of their cultural identity here at the Rancho.

When you visit us, keep an eye out for hints of Ying and Fan’s Chinese heritage in the laundry room, where they would have spent long days washing and ironing all of the Rancho residents’ clothes and linens. In this room, you can find a small, inconspicuous incense burner, which would have allowed Ying and Fan to practice their religion without drawing much attention from the Congregationalist Bixby family. See if you can also spot our nod to Chinese food and drink—a traditional tea set and picnic basket with chopsticks.

Chinese Historical Society of Southern California. Down by the Station: The forgotten Chinatown of Los Angeles. http://www.chssc.org/History/OldChinatowns/buriedchinatown.html.