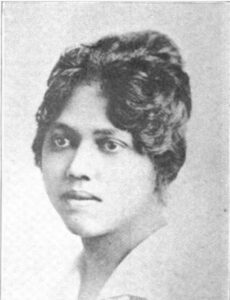 Portrait of Ruth Janetta Temple, courtesy of the Encyclopedia of Seventh-Day Adventists

Considered the first Black woman physician in the state of California, Dr. Ruth Janetta Temple was a medical doctor, a prominent figure within the Seventh-Day Adventist Church, a public health official, and an advocate for underserved communities in Los Angeles. She was born in Natchez, Mississippi in 1892 to a teacher mother and a Baptist minister father. Dr. Temple spent the first decade of her childhood in the South of the U.S. until her father died and the family moved to Los Angeles, California.

An event early in Ruth’s life first sparked her interest in medicine. When she was just 13 years old, her brother Walter was playing with gunpowder in the backyard. He packed the powder into a hose without knowing the consequences, and the concoction blew up in his face. The siblings’ mother ran from the scene; Ruth stayed and evaluated her brother’s injuries. Not long after this event was another occurrence that inspired Ruth to become a physician. One day, the Temples’ young neighbor fell into a ditch and, while no one else knew what to do, Ruth remained at the scene and gave him CPR. Once medical help arrived, it was revealed that Ruth had quite likely saved the boy’s life! Ruth’s drive to pursue medicine continued into her teenage years and she earned a fully-paid scholarship to what is now Loma Linda University, located in the Inland Empire of Southern California. Enrolling in 1913 on a five-year course to study medicine, she was the only Black student for most of her time spent there and she was the first Black female to graduate from the university. With a head full of knowledge and a drive to serve, she began her career, excited to carry on the medical and religious practices she’d learned in school.

Ruth began her career in Southeast Los Angeles where she tried to secure medical services and support for the underserved communities in the area but nothing materialized. However, she continued to practice general medicine and earned her title as the first Black woman physician in the state of California. In 1923, Ruth started an internship with the Los Angeles City Health Department and developed a passion for obstetrics and gynecology, which eventually became her specialization. Ruth’s personal life developed alongside her professional journey. She married Otis Banks in 1928 and did not have children; she considered the communities of Los Angeles and each of her patients as “children” to her. 1928 was also the year in which the couple purchased a small cottage in Southeast Los Angeles which became the Temple Health Institute–the first medical clinic in the region, and she practiced there, along with a multitude of other responsibilities, commitments, and positions she held concurrently.

In 1941, the Los Angeles City Health Department gave Ruth a full scholarship to study public health in a master’s program at Yale and, before leaving for New Haven, she was appointed the city’s first public health officer. She graduated with honors from Yale. Returning back to Los Angeles, she was then appointed the director of the Division of Public Health for LA, a department in which she was employed in various capacities and positions until her retirement in 1962. She also served as a faculty member at White Memorial Hospital in Los Angeles where she taught white medical students and overcame racial prejudices of the time. She retired from a long and dedicated career serving the communities of Los Angeles in 1962, with some of her retirement activities including serving as the director of the Health Education Department for Pacific Union, a Seventh-Day Adventist organization. In 1983, the East Los Angeles Health Center was renamed the Dr. Ruth Temple Health Center. Dr. Ruth Temple died in Los Angeles, the city she called home, in 1984 at the age of 91.

Dr. Temple has made many contributions to the communities and city of Los Angeles; to her family, friends, and loved ones; to the women she served thanks to her professional specialization in obstetrics and gynecology; and to the field of public health education.