Roots in California: Concepts of Home 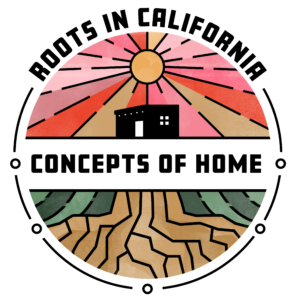 The exhibition examines the complex concept of home through these stories. Some people perceive home as a physical place, where they grew up. For others, the family and those they share their lives with are what makes them ‘feel at home’. The taste of food, beloved objects, and fond memories, are other ways that people define what home means to them.

Ideas of home became more complicated both at the Rancho and throughout the Western United States after the social and political changes that took place for Mexicans and Mexican Americans from 1890 to 1930. Mexican Americans were now viewed as immigrants in a land that had once been their country as well as their home. During this time Mexicans and Mexican Americans living in the U.S. were often perceived by the larger population as second-class citizens, and utilized as inexpensive laborers. This was especially true after World War I when there was a decrease in immigration from Europe and more of a need for cheap labor in the United States.

As can be seen from the political events in California from the 1890’s to the 1930’s, history often necessitates that people redefine their concepts of home. Sometimes they are forced to cross borders or take a long journey to a foreign land, in order to gain citizenship or the support of a new community. Some people see their home of origin as their only ‘real’ home.

How has your past history influenced your perception of home?

Unfortunately, some of the same 20th century issues raised by this exhibition are still challenging us today in the United States. Issues of diversity, equity, inclusion, and accessibility affect where we live and what we call home.

Thank you to our funder, the National Endowment for the Humanities, for their generous support of this exhibition

Tickets are no longer available.