By Christa Weston Gardens May 02, 2021 No Comments on May Garden News

Plant of the Moment: Romneya (Matilija Poppy). They are scattered throughout the California native garden, the flowers of this perennial started to pop up in mid-April. They are primarily native to Ojai, with scattered populations found as far south as Baja California. The Matilija poppy’s preferred habitats are dry washes and canyons where its underground stems can roam at will and help hold soil in place. It can tolerate some shade but blooms best with sunshine. Although its underground stems can pop up in very unexpected places in cultivated landscapes, most folks do not have the resolve to rip out this plant because of its glorious 9” white flowers with their yellow pompom centers that look a lot like sunny-side-up eggs! A distant cousin to the California poppy, it is said to be the largest poppy in the world. 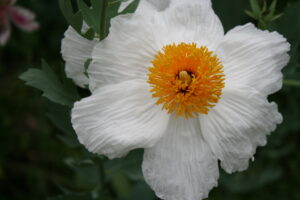