Romances at the Rancho

By Rancho Intern Upcoming Events Feb 06, 2017 Comments Off on Romances at the Rancho 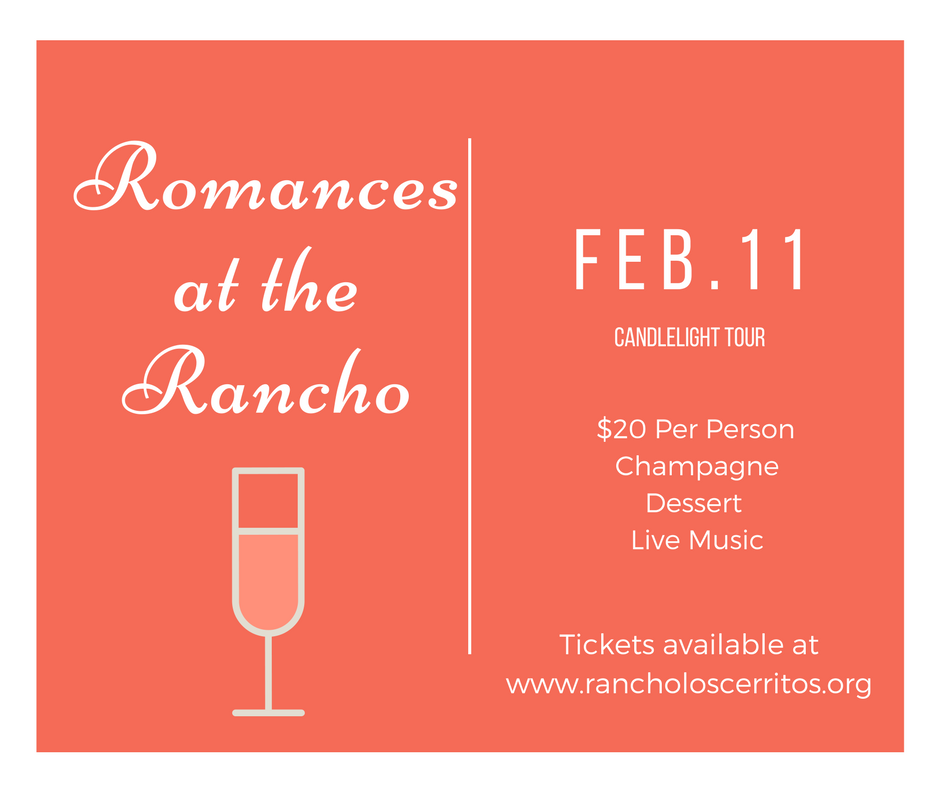 Through the power of storytelling, Rancho Los Cerritos’ “Romances at the Rancho” will conjure up an evening that can be enjoyed by couples and individuals alike looking to treat themselves to an evening of light-hearted fun.

“Romances at the Rancho” invites guests to a special after-hours, candlelight tour navigating through some of the greatest love stories the site has witnessed. Real-life couples will delve into these epic romances as costumed interpreters portraying former Rancho residents. The guided tours are scheduled in 15-minute increments with the first tour setting off at 6:00 p.m. and the last tour departing at 8:00 p.m.

And the reception awaiting visitors afterwards will not disappoint. It will feature a live sweetheart duet of clarinet and violin music in the gardens with sumptuous dessert and champagne on hand.

Among the Rancho’s 19th century couples will be Juan and Rafaela Temple, who built the adobe home in 1844. The Temples will share glimpses of their life on a cattle ranch in the mid-19th century, but keeping with the evening’s theme will also talk about how they first met and take listeners inside the story of their Mexican-era wedding. Traveling through time and great distances, visitors will also meet the second owners of the Rancho, Jonathan and Margaret Bixby. The Bixby’s courtship sparked during the Civil War Era and lasted well into their move to Southern California. Closing out the century are tales of secrets as John and Susan Bixby tell visitors about their wedding in the Rancho’s parlor in the 1870s after keeping their courtship hidden.

The 20th century doesn’t fail to deliver even more romantic stories as guests will be introduced to Manuel and Concepcion Liera, two boarders who met and married at the Rancho in the 1920s. Proving that love can last, the real-life Lieras returned to the Rancho to celebrate their 70th wedding anniversary  in 1994! Llewellyn and Avis Bixby will conclude the tour and delve into their renovations of the Rancho in 1930 and time here during the Great Depression.

Tickets for “Romances at the Rancho” are $20 per person and can only be purchased online. Each of the tours have been scheduled in 15-minute increments and are estimated to last roughly one hour. Visitors are asked to arrive promptly for the designated tour they selected.

Purchase tickets for the Feb. 11 event by visiting our event calendar. Make sure to keep your friends or “special someone” in the loop about “Romances at the Rancho” by inviting them on Facebook!