By Rancho Intern Uncategorized Feb 18, 2017 Comments Off on Reverend Hathaway’s Fight for Freedom 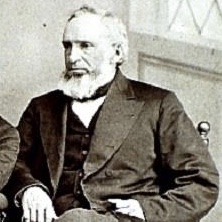 As people looked toward the West during the mid 19th-century, the presence of African-American cowboys in the cattle herding industry was overshadowed by depictions of a romanticized frontier at the reign of White cowboys. In Southern California, cattle ranchers like Rancho Los Cerritos ownder John Temple were being swept away with the booming demand for cattle caused by The Gold Rush in the 1840s. The Rancho has not been able to determine if Black cowboys aided this crucial time for the site, even though their contributions in this industry in other Western areas was critical. However, the Rancho did have inhabitants who would argue against the erasure of Black cowboys and persons of color from popular culture if they were still alive today.

One inhabitant who would have advocated for the visibility of African American history would have been Reverend George Whitefield Hathaway. Reverend Hathaway was an abolitionist and deemed a radical during his time. Born in Maine on Dec. 11, 1807, he was born to  Brown University educated lawyer Washington Hathaway and religious mother Deborah Hathaway. His mother urged him to become a clergyman, and he eventually fell into that path when he entered the ministry shortly after graduating from a religious studies program at Williams College. At 25, he was asked by a congregation in Bloomfield to be their pastor after they had struggled for years to find a replacement for their previous pastor. It was in Bloomfield that he married a local schoolteacher with whom he had eight children, one of them being Margaret Winslow Hathaway who would go on to marry Jotham Bixby.

Although Reverend Hathaway was committed to his family and congregation, he was also strongly devoted to his anti-slavery work. He sided with religious leaders who viewed enslavement as morally wrong because it encouraged men to act against God’s will in seeking the domination of others. He undermined the Fugitive Slave Act by opening up his home as a stop on the Underground Railroad. He concealed escaped slaves and assisted in transporting them to freedom as they fled north, jeopardizing his own safety for people who were denied their freedom and humanity.

Reverend Hathaway moved to Southern California to be near his family and friends in his later years. He enjoyed his time at Rancho Los Cerritos and later moved to Los Angeles where he remained active in churches and social circles. Reverend Hathaway was cared for by his family until he passed away in Los Angeles in 1891. Per his request, he was buried in Maine so his body could rest among his people.

Choosing to see the humanity in others, Reverend Hathaway would have wished for people today to do the same.