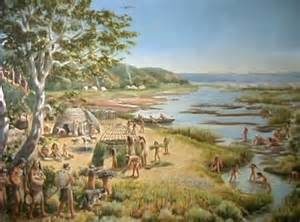 In 1930 eleven cogged stones were discovered at Rancho Los Cerritos. Dating to 2-5,000 BC, they represent the earliest presence of Native Americans in the area; however, little is known of these first peoples. Between 500 and 1200 AD, another group from the Great Basin of Utah and Nevada displaced the inhabitants of the region. They built 50-100 villages in the greater Los Angeles area; their village of Tibahangna lay near the river on the Cerritos property. Identified today as the Tongva, they lived off the land, gathering acorns, seeds and berries, fishing the rivers and oceans, and hunting for small game. Their highly complex society included extensive trade, technological achievements, a rich oral literature, formalized birth, rite-of-passage and death traditions, and a belief in a supreme being, Chinigchinich.

After Spain began settling California, the Tongva and other Native Americans were forced to move to nearby missions, where they learned new trades and were introduced to Christianity. Thus, the Tongva became known as the Gabrielino, named after the nearby Mission San Gabriel.