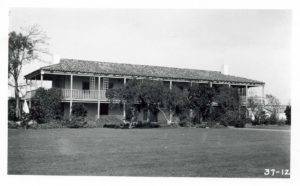 The Virginia Country Club was built next door and homes had cropped up in the area when, in 1930, Lewellyn Bixby’s son Llewellyn, Sr. chose to remodel Rancho Los Cerritos for his family. Although the renovation was extensive, the original configuration of Temple’s adobe remained intact. Ralph Cornell redesigned the grounds for the family, incorporating the trees that survived from the Temple era. After Llewellyn, Sr.’s death, the family eventually sold the house and 4.7 acres of land to the City of Long Beach. In 1955 the site opened as a public museum dedicated to the history of the Rancho and the surrounding area.