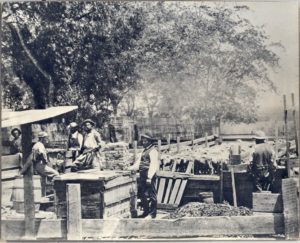 Brothers Thomas and Benjamin Flint and their cousin Lewellyn Bixby founded Flint, Bixby & Co. and began raising sheep in Northern California in 1854. In 1866 the company selected Lewellyn’s brother Jotham to manage their southern ranch, and three years later Jotham bought into the property and formed his own company. From 1866 to 1881, Jotham Bixby and his family resided in the Cerritos adobe. As many as 30,000 sheep were kept at the ranch and sheared twice yearly to provide wool for trade.

Jotham and his wife had seven children, and numerous cousins, aunts and uncles resided at or visited Rancho Los Cerritos, contributing to a lively, undoubtedly hectic atmosphere. Sarah Bixby Smith shared personal moments from this time in her memoir Adobe Days.