A Walk to Remember: Couple Shares Special Stroll at RLC

Judith Navarro and Jeffery Thomas spent their 8-year dating anniversary at Rancho Los Cerritos on December 5, 2018. Thanks to help from a variety of family, friends, and RLC Staff, Jeffery organized and executed an unforgettable, private, and intimate stroll for himself and Judith that commenced in the orchard and meandered through the rest of the gardens and grounds, the experience made complete with photos hanging from the trees and foliage representative of the couple’s personal journey through the years together. Their tour penultimately peaked with a serenade on RLC’s covered porch of a song written and sung by Sheldon Botler and accompanied by Bassist Gina Ramirez and Pianist Paige Williams (all personal musician friends of Jeffery’s), where Judith and Jeffery danced sweetly like nobody was watching.

Immediately following their private concert, Jeffery then led Judith outside to the courtyard, where he proposed marriage during a brief break in the day’s rain.

How’s that for a Valentine’s Day love story?

But that’s not where this journey ends, nor where it begins. 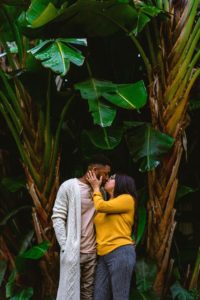 Judith and Jeffery are both Long Beach natives who met while attending Longfellow Elementary here in Long Beach. While in different classes their 4th Grade year (1999), both took a field trip to RLC together with their school that coincided with their in-class curriculum on California Mission history. But the two were not really close until their time at Lakewood High School, where they did finally get time to know one another better. Still, they did not consider themselves a couple. It wasn’t until after their high school years that “the coast was clear” according to Jeffery, and the two started officially dating in 2010.

RLC has had special meaning to Jeffery since that 4th Grade field trip. A resident Bixby Knolls, he has considered RLC his local “chill spot” for a while now and still loves to come over to visit or walk through the gardens, just get away from it all. Judith moved to Houston in 2011 and the couple was long-distance until she moved back to Long Beach in early February (last week actually!) due to the proposal. While she had not been back to RLC in a while, she has always appreciated nature and the outdoors.

When it came down to Jeffery selecting just the right spot for their milestone moment, it all came back to RLC. “This is a beautiful outdoor space,” Jeffery said. Judith immediately agreed. “I definitely appreciated that,” she said. Both additionally added that the privacy here at RLC also has made their memory that much sweeter. 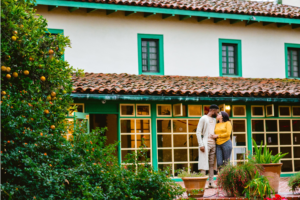 I asked if Judith had any inkling of what Jeffery was up to. He then fessed up to having flown to Houston to speak with her mother specifically about his intentions and that Judith’s middle sister happened to be present during that talk. Jokingly, he said that meant that pretty much everyone else in her family ended up knowing ahead of time – all except for Judith. She did admit that there were a couple specific photos on their special garden walk in December that tipped her off to what was coming. “When I saw baby photos of both of us, I was shocked,” Judith said, still a little choked up. “I think it was in that exact moment I had intuition that this was more than just a regular anniversary celebration.”

Judith and Jeffery have set their next special date – for the wedding – as February 22, 2019. Yes, just two weeks from now! They’ve planned for a small, private ceremony (location TBD, but both stated that RLC is definitely in the mix!), with a larger reception to be held later in 2019.

Congratulations again to Judith and Jeffery! Want to make your own memories here at RLC? Have a special occasion coming up? If so, please contact our Special Events Coordinator, Diana Hutchinson at rancho@rancholoscerritos.org or call (562) 206-2040.