Black On the Range: African American Cowboys of the 19th century

By Curatorial Intern history, Uncategorized Aug 13, 2021 No Comments on Black On the Range: African American Cowboys of the 19th century

Black On the Range: African American Cowboys of the 19th century

“They numbered thousands, among them many of the best riders, ropers, and wranglers.”

Map of the American West

Did you know that 1 out of every 4 cowboys was Black? Historians now estimate that between 20 to 25% of cowboys in the American West were African American. Oftentimes popular films and literature that depict the Wild West fail to convey the diverse nature of the Western Frontier. Since the Civil Rights Movement of the 1960s historians and other scholars have inquired more about the integral role African Americans played in the settlement and development of the West. Being a cowboy was one of the few ways African American men and some women were able to obtain autonomy and freedom in ways typically unheard of during the 19th century.

After the Civil War ended in 1865 many African Americans migrated to the West or became free people in the West. While they were enslaved many African Americans had acquired skills that were useful for the cattle industry. Black cowboys were taught the cowboy way of life by vaqueros, who were Mexican or Spanish cowboys, their former slave masters, or Native American cattle handlers. Vaqueros were the original cowboys of the American West and their skills transformed the cattle industry, especially in California.

The term cowboy has interesting origins. Originally, White cowboys were called cowhands, and African Americans were pejoratively referred to as “cowboys.” African American men being called “boy” regardless of their age stems from slavery and the plantation era in the South. Many southerners moved to the West and westerners would have been familiar with southern racial etiquette. So, it is no surprise that the racial issues prevalent in the North and South were also impacting the American West.

The everyday life of all cowboys on the job was usually rough regardless of a cowboy’s racial or ethnic background. Black cowboys were usually assigned horses with “wild behaviors” and they had to train them to be ridden. Typically, African American cowboys had more than one duty. For example, a Black cowboy that was a trail cook would be expected to cook, hunt deer and wild turkey, perform on the trail by singing or playing a musical instrument. Some Black cowboys also fulfilled a role as a nurse, bodyguard, and money transporter for White cattlemen.

One of the most well-known Black cowboys is Nat Love. Nat Love was born into slavery in 1854. While most slaves were illiterate, his father taught him how to read and write. After the end of the Civil War, Nat left Tennessee and headed westward in search of a fortune. During his journey as a cowboy, he learned to speak Spanish, became a champion roper, and eventually published an autobiography in 1907. In some ways, his autobiography romanticizes the rough life of a cowboy but perhaps his exceptional skills enabled him to live a thrilling life. 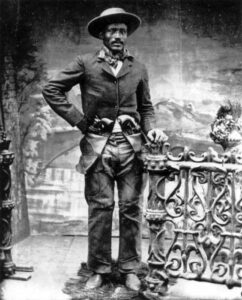 Another interesting African American cowboy is Isom Dart. Isom Dart was not just a skilled cowboy he was also an outlaw. Similar to Nat Love he was born a slave. Once he was freed at the end of the Civil War he drifted between ranches until he ventured to Mexico. In Mexico, he began a career as a horse thief. Throughout his life, Isom Dart held lawful jobs but oftentimes he made decisions to break the law because his heart was broken or when he lost a good chunk of his money in a crooked poker game. Overall, Isom dart lived a daring life that ended when he was killed by a livestock detective.

It is easier to find information on well-known Black cowboys because many of them were literate and extraordinary individuals. However, the exceptional Black cowboys do not represent the majority of African American cowboys who were ordinary and had limited access to social mobility. Ordinary African American cowboys also lacked protection from wealthy white cattlemen. While the American West was not a racial utopia, Black and White cowboys were able to share tents and blankets on the trail.

In essence, there were thousands of Black cowboys in 19th century America. The majority of them were ordinary cowboys seeking an escape from racial violence and some of them were exceptional cowboys.  I grew up watching westerns with my father and I did not know that African American cowboys existed until college. The Wild West was more diverse than popular Hollywood films and novels would have you believe. Vaqueros, Native Americans, Chinese immigrants, African Americans, and European Americans all contributed to the development of the American West.

The Negro Cowboys by Phillip Durham and Everett L. Jones.