Black people contributed to shaping the region we now know as Southern California. Their history has often been erased due to a lack of emphasis on preservation and research and due to whitewashed versions of history that are often presented in media. From the 1780s to the 1930s there were many people living and working in the region who were of African heritage. Rancho Los Cerritos was one of the first Spanish settlements in the region and Black people were a part of its development.

In 1784 Manuel Nieto, a Spanish soldier, received a land grant of 300,000 acres as a reward for his military service and to encourage Spanish settlement in California. Nieto’s acreage was reduced in 1790 because of a dispute with the Mission San Gabriel, which reduced his claim to 167,000 acres stretching from the hills north of Whittier to the sea, and from today’s Los Angeles River to the Santa Ana River. This was the largest of any land grant at the time. It is important to note Nieto’s African heritage, he is referred to in the census and other documents as mulatto, meaning he was of Spanish and African descent. His heritage is important to recognize because it shows that people, especially landowners and developers during the Spanish and Early Mexican Era, were not all of a homogenous white background. Many landowners were in fact African, Indigenous*, and Mestizo.

Upon his death in 1804, Nieto’s children inherited his property and in 1834 the land was formally divided into six parcels. Nieto’s daughter, Manuela Cota, received the area known as Rancho Los Cerritos, approximately 27,000 acres bordered on the west by the (now) Los Angeles River and on the south by the Pacific Ocean. Following her death, her heirs sold the Rancho to relative John Temple in December 1843. Temple constructed the present adobe home in 1844 as headquarters for his large-scale cattle ranching operation.

In Southern California, cattle ranchers like Temple were busy with the booming demand for cattle caused by The Gold Rush in the 1840s. At this time, 1 in 4 cowboys was Black. While Rancho Los Cerritos curators have not been able to determine their names, it is not unreasonable to assume that Black cowboys worked at Rancho Los Cerritos, as their contributions in this industry in the area was critical. The presence of African-American cowboys in the cattle-herding industry has been overshadowed by depictions of a romanticized frontier run by White cowboys.

African-American land ownership is estimated to have peaked in 1910 when African-American farmers made up approximately 14% of all farmers in the United States. The area of Rancho Los Cerritos developed into the town of Long Beach as portions of the ranch were sold off and developed during the oil boom of the 1920s. During this time, the area was subject to discriminatory practices such as red-lining, and no African-Americans (as well as other marginalized groups of people) were allowed to own or rent property in the neighborhood. This systemic racism led to the segregation that still affects neighborhoods today.

Black people have been a part of the history and development of Southern California since Spanish conquest. These individuals helped with exploring and colonizing the New World as laborers, artisans, servants, and explorers. People of African descent played important roles in the founding of early California towns, including Los Angeles. Twenty-six of the forty-six settlers of the pueblo were Black or referred to at the time as mullato. One such settler, Francisco Reyes, was elected to serve as alcalde (mayor) during the 1790s. Black people continued to hold leadership roles in the nineteenth century, when there were four California governors of African descent from 1831 to 1847, most notably Pio Pico. Landowners with African heritage in Spanish and Mexican California included Franscisco Reyes who owned land in the San Fernando Valley, José Bartolomé Tapia who owned Rancho Malibu, and Manuel Nieto. Black people played key roles in cattle ranching dating back from its inception during the Spanish period. African Americans continued to work in cattle industries into the nineteenth century when they experienced discrimination and exclusion from many other occupations. However, Black cattle workers were certainly not immune from American racism. According to historian William Loren Katz, “some authorities believe the word ‘cowboy’ derives from the fact that so many were African Americans­–and whites would not dignify them with the term ‘men.’”[1] This not only indicates the racism these men faced, but also suggests that African Americans were so prominent in the industry that the moniker they were given applied to cattle workers in general.

Many African Americans were brought to California as enslaved workers during the Gold Rush, and some were able to earn enough in the gold fields that they bought their own freedom and that of their families. Some free and enslaved Black workers owned mining companies, like Sweet Vengeance Mine and Silver Mining Company. In the 1850s a growing number of African Americans migrated to and settled around the Los Angeles area, such as Bridget “Biddy” Mason. She was a real estate investor, nurse, midwife, and philanthropist who was enslaved when she came to California. After three years of residency a judge ordered her freedom and the freedom of her children, partly thanks to her court testimony. After achieving financial success in real estate, she committed herself to charity work in her community. She helped found the First African Methodist Episcopal Church in Los Angeles in 1872.  Biddy Mason is just one example of the many African Americans who were successful and pioneering contributors in all realms of public life in nineteenth century Southern California. The Black population grew at increasing rates through the end of the nineteenth century, and continued through the Great Migration when millions of African Americans migrated out of the South to cities in the North, Midwest, and West in search of better lives in the beginning of the twentieth century. Many of these migrants settled in California, where the Black population tripled from 11,045 in 1900 to 38,763 in 1920. This population growth contributed to the 1918 election of Frederick M. Roberts, the first African American to serve in the California State Assembly.

Due to systemic racism and whitewashing of history the contributions of Black and African-American landowners, farmers, and cowboys are often overlooked when it comes to the history of Southern California. In 1955 the Rancho Los Cerritos historic site opened as a public museum. Today Rancho Los Cerritos strives to preserve the stories of all of the diverse voices who shaped Southern California, and an important part of that is acknowledging the contributions of Balck people to history. Rancho Los Cerritos’ goal is for all visitors to be able to see themselves in history. 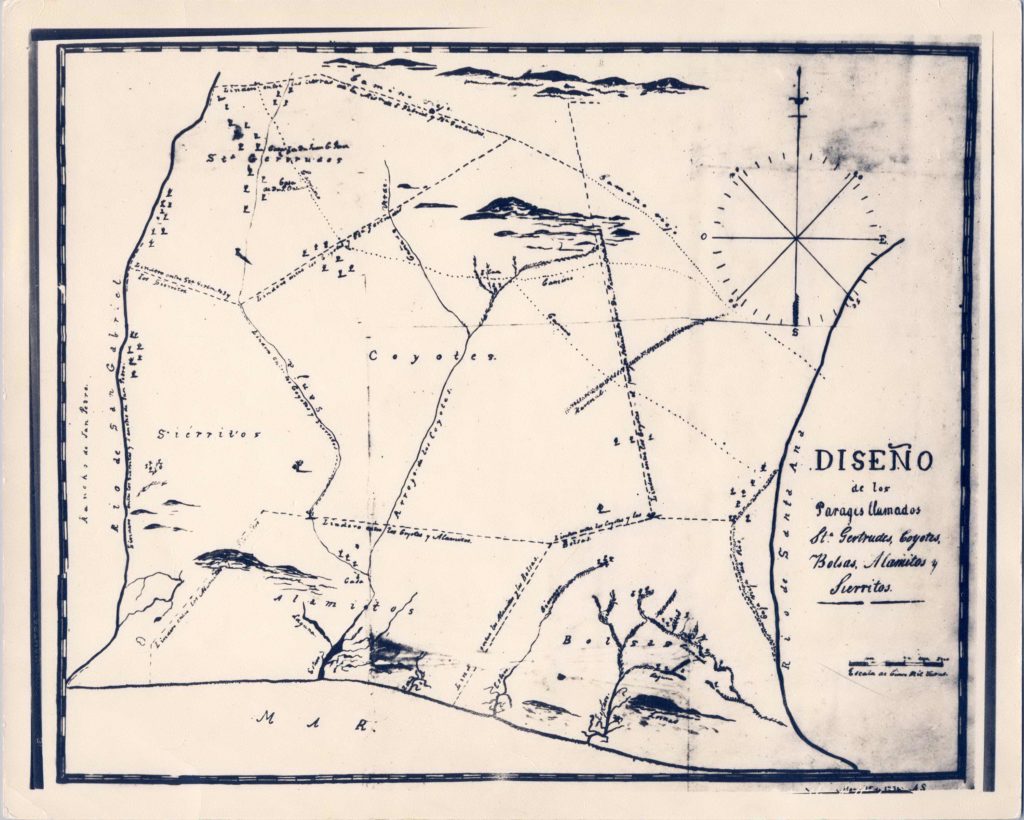 Map of the Nieto Diseño. This was the original land grant that was given to Manuel Nieto in 1784. The outline of Rancho Los Cerritos (Sierritos) is on the left side of the map. Drawn on May 1, 1834, by Abel Stearns.

*It is important to acknowledge that the first inhabitants of the land were the Indigenous people and not the landowners/developers referred to in this article. The tribes of the Tongva and Kizh people lived on the land that would later become known as Rancho Los Cerritos first.

Agyeman, Julian, and Kofi Boone. “Land Loss Has Plagued Black America since Emancipation – Is It Time to Look Again at ‘Black Commons’ and Collective Ownership?” The Conversation. The Conversation, October 27, 2020. https://theconversation.com/landloss-has-plagued-black-america-since-emancipation-is-it-time-to-look-again-at-black-commons-and-collective-ownership-140514.

Rothstein, Richard. The Color of Law: a Forgotten History of How Our Government Segregated America. New York: Liveright Publishing Corporation, a division of W.W. Norton & Company, 2018.

William Loren Katz, The Black West: A Documentary and Pictorial History of the African American Role in the Westward Expansion of the United States (Golden, CO: Fulcrum Publishing, 2019)