Southern California has a wide range of winter holiday celebrations that are reflective of the diverse peoples, cultures, and communities that make up the US. Some of the holidays celebrated at Rancho Los Cerritos before it became a historic site were Christmas and New Years. Las Posadas and Hanukkah are some other winter holidays that could have been celebrated at the Rancho. In the past, Rancho Los Cerritos has highlighted the Bixby family’s Victorian-era Christmas traditions because of the wealth of information they left behind. However, oral history interviews give us insight into the ways the Lieras and Coronados celebrated Christmas.

Las Posadas is an important winter holiday for many Mexican and Mexican Americans. Since Las Posadas has been celebrated for over 400 years in Mexico, it is possible that Las Posadas was observed at the Rancho. The meaning of Posadas, which translates in English to “The Inns,” comes from the biblical story of baby Jesus’ parents having trouble finding shelter in Bethlehem at night. Eventually, after being turned away from many inns, Mary and Joseph found shelter in a stable. Las Posadas is a 9-day religious festival that celebrates the journey baby Jesus’ parents took to find shelter. The foreman’s room at the Rancho is typically decorated to showcase Mexican traditions. For example, at the windowsill, you are able to see a nativity scene and on the bed, a seven-pointed piñata is used to symbolize the seven deadly sins. 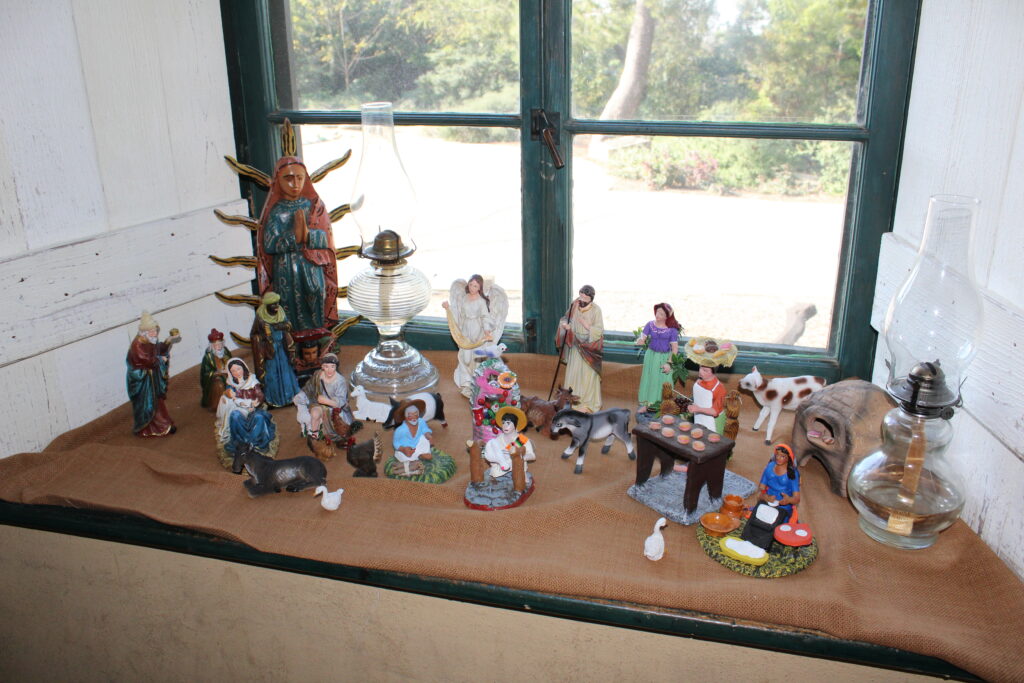 Hanukkah has been celebrated in Long Beach since the late 1880s or early 1900s. It is possible that Hanukkah was celebrated at the Rancho by the Newmark’s, a Jewish family that spent time in the adobe house. The history of Hanukkah in the United States is quite fascinating. Originally, Hanukkah was a minor Jewish festival for Jewish people all over the world. But Jewish people in America transformed Hanukkah into a grander celebration. Some scholars believe that American Jews began celebrating Hanukkah more often so their children would not feel left out during Christmas time. To this day Hanukkah is one of the most well-known Jewish holidays in the United States.

During the tenant period, Mexican and first-generation Mexican American people rented out apartments in the Rancho’s adobe house. Concepcion Coronado Liera lived at the Rancho during the tenant period. Concepcion recalls never receiving a Christmas gift or having a Christmas tree until Manuel Liera brought one to the adobe house. She also reminisces about all the wonderful food her mother would prepare for Christmas and how they would all gather together around a large table. Her father, a dairy worker, would receive two chickens as a gift from his employer for Christmas. He would tell Concepcion’s mother that “Santa Claus gave him his Christmas present.” According to Concepcion, those chickens would become the entire family’s Christmas gift. Overall, the Lieras and Coronados demonstrate that for ordinary people holidays are usually about being surrounded by loved ones and enjoying the simple pleasures of eating a good meal.

Winter holidays bring many families and communities together to eat traditional foods and indulge in holiday cheer. In the past, Rancho Los Cerritos has highlighted the Bixby family’s lavish Christmas traditions and other traditions of the Victorian era. In contrast, the Lieras and

Coronados celebrated Christmas in simpler ways. The Lieras oral histories help us diversify the holiday stories we are able to share and enable us to explore a more ‘complete’ narrative of Rancho history. Holidays have various meanings to different communities and families. What do holidays mean to you?