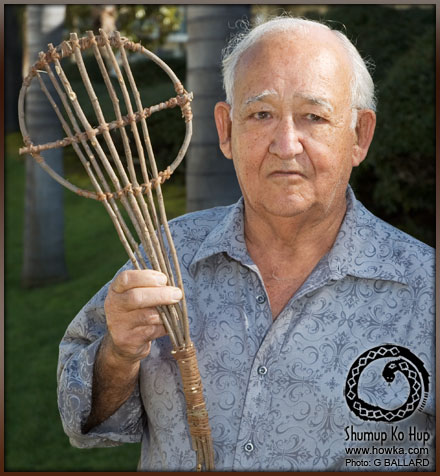 Join us for a series of special events connected to our latest exhibit, “Tevaaxa’nga (Te-vaah-ha-nga) to Today: Stories of the Tongva People.” In this talk, Master Weaver and Ipay Elder Justin Farmer discusses the history and techniques of Indian basketry in California. Register online or pay at the door.

About the Speaker
Justin Farmer began collecting Indian baskets and art in middle age. Justin’s basketry activities brought him into contact with his cousin, Christina Beresford Osuna, who lived on the Santa Ysabel Reservation, northeast of San Diego. In the early 1970’s, Christina was one of only three known California Indian weavers still able to make baskets in the traditional way. Under her tutelage, Justin learned much of Christina’s basketry knowledge. Over the next three decades Justin conducted many classes, lectures and demonstrations on Southern California Indian basketry. In 2004, Justin authored and his foundation published “Southern California Luiseño Indian Baskets,” a book on the study of 76 Luiseño Baskets in the Riverside Museum Collection. Justin has also authored and coauthored a number of other treatises on Indian basketry, religion and deer hunting. Farmer has served on the Board of Trustees of the Southwest Museum of the American Indian, The Autry Center, in Los Angeles, and he is a member of virtually every Indian museum in Southern California.