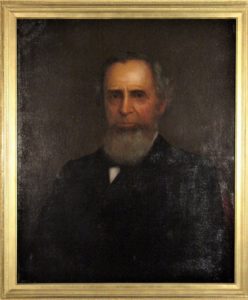 This oil painting is a portrait of Reverend George Whitefield Hathaway (1807–1891), and hangs in the Library. Reverend Hathaway’s legacy is centered around his fight for freedom for all. Born in Maine in the early 19th century, Rev. Hathaway was dedicated to his family, his faith, and his anti-slavery work. He was an abolitionist, and undermined the Fugitive Slave Act by opening up his home as a stop on the Underground Railroad. He concealed escaped slaves and assisted in transporting them to freedom as they fled North, jeopardizing his own safety for people who were denied their freedom and humanity. Later in life, Reverend Hathaway moved to Southern California, where he spent his time at Rancho Los Cerritos before moving to Los Angeles.